Shoujo Grand Summoning Chapter 214: Going all out to make someone suck photon blade

Wu Yan burst Accelerator’s plasma ball with his railgun and Accelerator is not a happy camper. His eyes were filled with malice, Accelerator wanted nothing less than to rip this guy to pieces with his bare hands.

Heaving hard, one of his eyes is already closed due to the damage he had suffered. The way he is wavering while standing, it’s amazing that he hadn’t collapsed onto the ground yet.

He took a reflected full power attack, slammed into the ground, and then he got buried in rubble. If he was a normal human, he would have already died a few times over already.

In addition to the damage he had suffered, he had been buried in the rubble for a bit too long as he showed signs of hypoxia all over his body as given by the weakness he feels. It is not an overstatement to say he is standing here due to his force of will.

That shot of railgun drained him of almost all his energy. Although he can fire railguns due to reaching Electromaster lv5, it is still a bit taxing on his current condition. And so, he collapsed like a marionette with its strings cut.

A pair of delicate hands supported him from the side just as he is about to fall to the ground.

Looking at Astrea’s worried expression, he forced a smile.

Wu Yan turned around and looked at a blood-stained Accelerator. Surprised, he looked back at Astrea.

Wu Yan sighed in relief. Since Astrea can somehow mitigate the effect of Accelerator’s reflect ability, his job now is to make sure Accelerator can’t deploy his plasma attack, defeating him would then be a cinch.

Obtaining sufficient oxygen, the feeling of suffocation had lessened and some of his strength returned to him. He got away from Astrea before continuing.

“Astrea. You are on the offense!”

“I can shoot another round of railgun, I will find an opportunity to support you. Your job is to figure out how to defeat Accelerator!”

She wants nothing more than for Wu Yan to rest and she would solo fight Accelerator. But, Astrea can’t stop Wu Yan after seeing that resolute albeit a bit pale expression of Wu Yan.

Wu Yan hesitated for a bit and he told her.

Astrea flinched, she is confused but she decided against pursuing the matter. Whatever Wu Yan says, goes!

He had a coin loaded between his fingers, unleashing all his computational power, with railgun locked and loaded, he needs only to fire it at this point.

Super vibrating photon blade, Chrysaor ejected from her wrist guard and she got into a stance before rushing Accelerator.

Accelerator’s expression turned sour, he knows it wouldn’t be fun to take a hit from her, not again. So, he stomped and a stone armor covered Accelerator after they grew out of the ground. He didn’t leave any skin exposed. He also opened his arms wide and conjured a tornado to blast Astrea with.

The raging tornado posed no threat to Astrea, she didn’t even have to use her Aegis L. She flapped her wings and dodged it just like that.

She swung her photon blade at Accelerator and smashed his armor to bits. Before she can follow up with another attack, she found that Accelerator had already disappeared.

At the same moment, four tornadoes of different sizes assaulted Astrea from the sky, the shadow of the tornadoes completely covered Astrea.

In the center of it all, Astrea suffered no damage. She did a 360 horizontal slash and split apart the tornadoes before flapping her wings to attack Accelerator once more.

A vicious swing of her blade was enough to smash pass Accelerator’s reflect and hit him bluntly.

Her photon blade is like a big, hard, and thick baseball bat and Accelerator is like a ball. She batted him hard like she’s gunning for a home run with Accelerator flying away.

In the brilliant light show that followed, the photon blade shined and crackled as it grew longer and bigger in size. It didn’t stop growing until it was several dozen meters long. At this point, it is an understatement to call it a big fucking sword.

Astrea took a stance and lifted it high up. 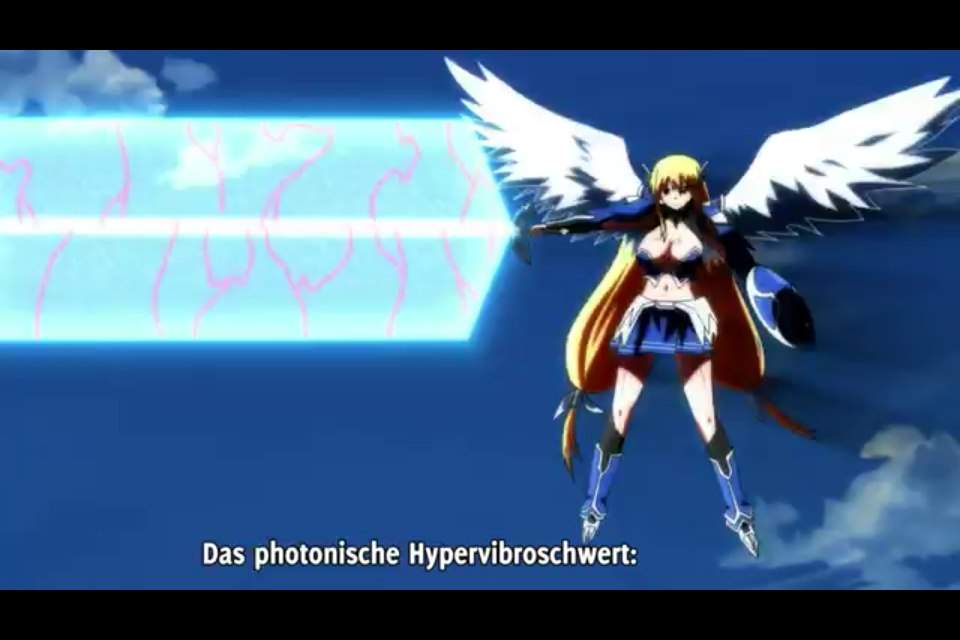 It’s going to take all 20000 sisters working together to piece you back together when I’m done with you.

That’s what Accelerator’s brain told him as his body shivered.

His red eyes couldn’t take in the entirety of the sword’s image. Gnashing his teeth, he managed to stop his body from trembling.

Astrea’s huge sword was giving him shivers like had never felt before. Adopting a grim expression, something in him told him that failure to defend against the next attack will inevitably result in defeat.

Sensing that he is actually afraid, Accelerator became as ravenous as an injured wolf, his eyes were beaming red.

History repeated itself, before the plasma ball could be completed, an orange bolt of laser smashed the ball apart.

With a short shout, she grabbed the photon blade with two hands and swung it down.

Accelerator’s coat of reflect got split apart like tofu. There is no gimmick to this attack, no leverage on his weakness. It was the most brutal and direct attack possible, a force on another level altogether sliced through the reflector shield and hit Accelerator’s lanky frame.

He couldn’t believe what he is seeing, blood spewing out in copious amount and that excruciating pain instantly caused him to lose consciousness as he fell to the ground.

Mission 3 started the same time mission 2 was completed. He knew that this meant Accelerator is recognized by the System as having been defeat by him and his partner.

Exhaling heavily, crippling fatigue grabbed him and he drooped his head and collapsed before he can see what Mission 3 is.

Before he lost consciousness, he could vaguely see Astrea rushing towards him as well as 3 familiar figures approaching him rapidly…