When Wu Yan & company boarded the deck, Ikaros stopped for a moment and her iris changed from indigo to deep red and back in a blink of the eye. It happened so fast it’s like nothing happened and all is but an illusion.

Wu Yan noticed the instant she stopped and he turned his head back.

Lifting her head she answered.

“Master, there are lifeforms with significant danger rating!”

They exchanged glance and Mikoto walked over to her side.

Pulling at her clothes to get her attention, she asked her.

“What you mean is that you detected strong individuals on this airship is that correct?”

She returned her gaze on Wu Yan. The manner with which she does this one would think that if she didn’t see him for even a second she’s afraid he would disappear.

“Ikaros, how strong is the individuals you detected?”

He whispered by her ears.

She still has her sights on him as he said this, she stopped for a bit before continuing.

Twitching his eyelids, he hurriedly stopped her.

“Erm, I think it’s best not to act rashly, we will keep an eye for any change for now!”

After she went back into expressionless mode, Mikoto and Hinagiku asked him.

“The number is 3 that’s clear but what did she mean when she gave her judgements on strength and danger?”

“I see, in her settings, strength with an A rating means they’re on the same tier as her, that is to say in this airship there’s 3 tier 8!”

he said with a serious expression.

“The tier 8 have finally made their appearances…”

She exclaimed, tier 8, that’s her goal for now, with the strength she has now they’re existences she looks up to.

“I thought there were some miscalculations when we didn’t see any tier 8 but it seems they were hiding.”

she said after a fruitless scan of the airship.

“Well that’s understandable, they’re tier 8, the ace in the hole the auction firm has managed to round up for a treasure hunt, being tier 8 why would they want to stand together with everyone else on the plaza?”

“3 tier 8 huh, Ikaros do you know their specific level ?”

Mikoto grumbled before asking her.

Shrinking her pupils without changing the colour of her iris she scanned the surrounding before reporting to them.

“Undefined, specific strength cannot be identified, scanning for position, no coordinates at the moment.”

“Stop it Ikaros, if you can’t find them then don’t. They will appear sooner or later!”

He said while grinning and rubbing her forehead.

Turning to look at him she stared blankly before responding.

Beaming he regrettably retracted his hand.

The airship floated up while they are engrossed in conversation. Stopping in midair the airship spun around, probably to determine their direction. It then adjusted itself and set sail towards the south.

“This is incredible, it’s my first time in an airship…”

“Actually, this is my first time as well…”

He said wryly laughing while carrying Lirin who jumped into his arms from god knows when.

“That’s a given, I have never seen a ship floating in the air before, well, except for a certain ship that reports weather daily, and you being from a more technologically behind civilization couldn’t possibly have seen it either…”

Speechless, what she said is correct, his scientific world could only be described as so relative to Mikoto’s world who are 30 years into the future.

Seeing as he’s not going to say anything, a bit unamused she looked away.

“And, what’s next? Should we wait until we arrive or do we go find the 3 tier 8 right now?”

He pondered a bit before responding.

“No, there’s no need for an assertive stance, if we alarm the snake in the bush we would only draw unnecessary attention to ourselves.”

“I think they are already aware of our presence no?”

A bit bewildered she asked him.

“Since Ikaros could detect them then being on the same tier the 3 individuals should be able to notice her strength even if they could not determine her exact strength isn’t it?”

He rejected her notions with a handwave.

Raising her eyebrows she pursued him.

Eyeing Ikaros by his side he smiled.

“Ikaros can detect them because she has the scanning function in her system, that’s why she could notice their presence!”

“Even if she has very good perception, on why are you so sure they couldn’t do the same?”

“No, I can definitely say they didn’t notice us!”

He explained while bitterly laughing.

“You don’t know this but the natives of this world are split either into training dou qi or magic, inside them exist either mana or dou qi. According to what I know the native cultivators of this world detect presence by means of this dou qi and magic that exist within people.”

She understood after he put it this way, she hammered her palm with her fist.

“They can’t detect us who don’t have any magic or dou qi!”

Giving her the carrot he grinned.

“We can’t generalize yet since we don’t know if there might be special methods of perception on this world. However, one thing is for certain!”

“Even if they notice us they absolutely can’t tell our strength!”

He confidently pointed out.

“we don’t cultivate dou qi or mana, how would they know how strong we are? They can’t gauge our strength using System like us!”

“Well, for the time being you do have a bit of good judgement in that head of yours!”

Observing the clouds as they flow pass he noticed something off.

“Mikoto, don’t you think something is missing?”

It felt very upsetting, it’s like he let something slip by him.

Startled by his perplexed expression she also recalled she’s forgetting something as well. Musing she continued.

“Hmm, since you put it like that I do feel like compared to the usual times we are lacking something…”

As the two lost themselves in their introspective meditation, Lirin who’s still in his arms tugged at his neck.

“Brother, are you guys looking for sis Hinagiku?”

It feels like it has been a while since they heard her voice, it was some time before they asked an important question.

Mikoto looked around but she can’t find any trace of her.

Lirin pointed at a pale white Hinagiku who had black lines running down her forehead. She’s currently sitting in a reverse 8 figure  (TL: Try finding this “八” shape in the following picture. Found this after I typed onna no ko zuwari, sitting like a girl) 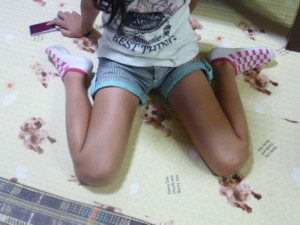 “What happened to her?”

Slapping his forehead he moaned.

“I almost forgot… Kaichou-sama has acrophobia…”