This novel is translated by Flowingcloud from Yado Inn as a colaberation with Ebisu Translations. Please check out more of me and my group’s translations at Yado Inn! Support me through Paypal, Patreon, or Ko-fi! Also, please turn off ad-block! Join Yado Inn’s Discord to join the community!

After the incident in the morning, I somehow succeeded in explaining the situation.

After this, there is the enrolment guidance at the college. We decided to respectively introduce ourselves to deepen our friendship before that.

“Kyouya Hashiba. I came from Nara prefecture. Please take care of me….”

“Is family name ok? Or by first name?”

The gyaru across from me frankly asked.

Somehow, my heart skipped a beat just be having my given name called.

(If it’s that sort of shop play, it’ll take quite an amount of money. Or rather, (room) sharing together with a girl, seriously…!)

To me, who certainly thought that it would be a dirty cohabitation of four males, it was a organization that I did not expect. Furthermore, it was balanced between 2 males and 2 females.

Just when I expressed it, both the two girls simultaneously titled their head in confusion.

At that moment, I finally noticed what I had done.

I do not clearly remember, but the phrase normie should not have lapsed 10 years since it was commonly spread.

While I attempting to explain it in a fluster.

“Real. In other words, the guys who are fulfilled with real life?”

The guy quickly helped me. 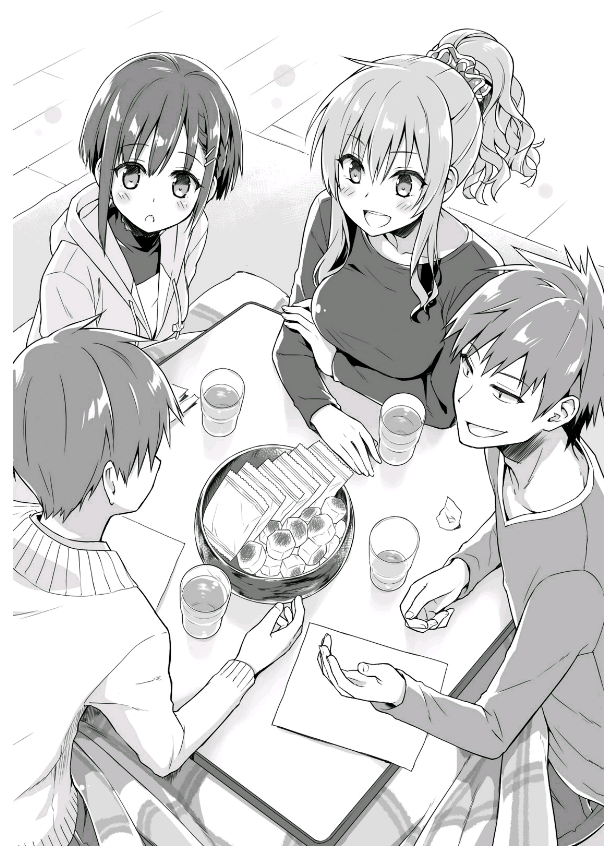 “It’s a phrase that recently appeared on such things like 2ch. The phrase is an abbreviation for the group that’s fulfilled with life. [3]

…That’s good. The phrase was just beginning to circulate around.

I managed to survive with that save, but it looks like I should be careful from now on when it comes to slang.

The guy next to me with a bad expression in his eyes while scratching his head began to talk .

“Rokuonji…Tsurayuki. My family name is super long, so call me by my first name please. That’s all.

Rokuonji, Tsurayuki… it’s a strong name that feels like a power word, but.

Tsurayuki is a guy who has a tall, slender build that matches with his long T-shirt and slim jeans. His hair was cut cleanly albeit shorter than mine.

I’ve got no objections calling him a handsome guy, but the hostile look in his eyes and unsociable expressions ruins it.

“Woow, that’s amazing, his last and first name seem like they would appear in a textbook.”

The neighboring small girl to my right was amazed. [4]

“I understand, somehow inserting ‘temple’ into his last name increases the substantial feeling.” [5]

The gyaru across from me had a similar reaction.

“Forget about my last name. Rather than that, look, next one, go.”

Thinking that it wasn’t worth continuing now, Tsurayuki urged the next one to go.

The gyaru who was sitting with her legs out to one side fixed her posture.

“I am Nanako Kogure. I am from the Shiga prefecture. I’ll be in you care from now on.”

I was worried on how to approach her at first sight, but unexpectedly she properly introduced herself. [6]

Her somewhat colored brown hair was tied up in a bundle behind her, and held together with a strong colored scrunchie. Her face was clear, her almond-shaped eyes had a formidable feel to it. Nevertheless she was a beautiful person with a good appearance.

Before Tsurayuki finished his teasing, Kogure’s fist dove right into his stomach at a good angle.

“You! Just a few moments after the introduction, you poked at the part people didn’t want to get poked at the most!!”

… Ah, as expected she was concerned about that.

Me and the small girl were slack jawed at that gut check. Seeing this Kogure panicked.

“M-my family was lax on school regulations! They didn’t say anything particular about my dyed hair! It doesn’t mean that it was just me who was a delinquent! No! Seriously!”

Right now, she just said, “It does not mean that it was ‘just’ me.”

Excluding Kogure, all of us were probably reminded of a car horn honking late at night or the blaring of a trumpet. That subject, however, wasn’t touched upon in particular.

When I tried to call her by her family name, I was glared at with great intensity.

At that moment, the family name Kogure was nonexistent in our minds.

The small girl cleared her throat with a cough.

It was faint, but hearing her speak with an accent, I can’t help but think that she was a child that came from far away. [8]

“Ahh, before you say your name I have a brief question though.”

“Er umm. You skipped grades up to college right? How old are you really?”

While Tsukayuki carelessly asked that, his throat was met with a knife hand without a second’s delay.

“I properly graduated high school! What is this lad saying?!”

Her cheeks bulged like a squirrel and got mad.

“What? But with her height like that, wouldn’t you think about that even for a moment?”

To be honest, I cannot deny that I thought that for a moment as well.

“Well then, to start over again…”

The girl, who appeared to be a JK just the other day, earnestly puffed up with pride firmly,

“Really? I think it’s the first time someone said it was unusual.”

She wore an expression that said it was really surprising.

“Eh? But doesn’t Shinoaki sound like a guy’s name? Besides…”

While speaking an uncomfortable feeling began. Shinoaki went on and smiled.

“My family name is Shino and Aki is my first name. Because of that, Shinoaki.”

Everyone nodded with the understanding facial expression.

“As expected, you were mistaken. My name is short.”

Her suddenly realizing that means that this happened before, probably.

“So what was Shino called so far?”

“Well you see, I was also called by my first name but I was mostly called by my full name as it is… I think. Well, since everyone is calling each other by their first name, so Aki is.”

Except her, the three of us nodded as if we agreed upon it, and.

“I guess Shinoaki is fine.”

Ignored the will of the person herself, it was decided to use the reading of her full name.

Footnotes:
1. JK = joushi kousei = high school girl.
2. For the term ‘Riajuu” I will be using the term normie. They will explain what it is later in the chapter. Just remember that it’s pronouced “ria – juu.” Ria comes from ‘Riaru” (aka real).
https://www.urbandictionary.com/define.php?term=riajuu
3. 2ch = 2channel aka 2chan, now rebranded as 5channel
https://en.wikipedia.org/wiki/2channel
4. It is unknown whether this is the mistake of the illustration is the mistake, but in the illustration the girl is sitting to his left. Also, there are also a few more descriptions later that don’t fit the illustration, so just pointing it out.
5. Okay, the beginning of the name puns. Tsurayuki’s family name, Rokuonji, is written as 鹿苑寺, and 寺 means temple. It’s referring to how many temples are in Japanese history textbooks, which makes his name sound important. Also, his last name is also a reference to Kinkaku-ji, which is offically named Rokuon-ji.
https://en.wikipedia.org/wiki/Kinkaku-ji
6. I think I should just point out that the reason that he keeps pointing out she looks likes a gyaru and keep describing her as one is because people do not have a good impression of gyarus as some (but not all) are gangsters or related to something bad. That’s why he’s surprised that she normally introduced herself with polite speech (which I tried to show as best as I can in translation (rip lost in translation)).
7. Okay, this is a really shit pun from Tsurayuki. Kogure’s name was divided into Ko-gure. ‘Ko’ means child, while ‘gure’ is a verb which means turning into a delinquent.
8. Yea, the loli speaks with an accent, but it’s so little, that you can’t noticeable translate it. Just remember she has a slight accent, but it’s ignorable.