This novel is translated by Flowingcloud from Yado Inn as a collaboration with Ebisu Translations. Please check out more of me and my group’s translations at Yado Inn! Support me through Paypal, Patreon, or Ko-fi! Also, please turn off ad-block! Join Yado Inn’s Discord to join the community!

TL/EN Note: The following footnotes, except for the last one (footnote 10), are just the explanations of the directors. You don’t have to click them if you don’t want to. The last one is just explaining the pun involved

While continuing to listen to the explanation regarding taking classes, the previous professor’s words repeated in my head.

(That was pretty clever.)

Come to think of it, this industry is hard to enter. Her talk had nothing to do with fims, anime, or games; only a really stellar person would be able to sell their name and become famous. Even if this era is the so-called ‘platinum’ one, not every person at the time shined. …Wouldn’t my previous future self be the best example?

Just like the professor said, there is no worth if pleasure isn’t demanded. Necessities of life are prioritized.

If I’m already depressed from the get-go, nothing will come from it. I have to advance forward.

The guidance moved on to the next item. Once more, Department Chair Sasai stood on the podium.

“Next off is, I will have everyone introduce themselves one by one. Let’s have student number 1 start…. Hmm, since it’s the film department, let’s introduce our favorite film director.

Having said it, I’m stumped.

I did have a good balance of work hours, and I managed to watch films every now and then.

To be honest though, I haven’t remember the names of the directors of them.

While I was flustered, the self-introductions started.

However, a question mark fluttered about my brain.

(Eh? Seriously…? I don’t know any of local or international film directors?)

I now regret not looking at the names of film directors at Wikipedia before enrollment. Umm…yeah. I should use Wikipedia a lot during this era.
When I was searching for someone within my memories.

A crisp voice passed from the seat immediately in front of me.

I raised my head without thinking.

The girl named Kawasegawa was a beautiful person with long curly hair. Balanced looks, rather than refreshing.… she had sharp eyes.
However, the words after introducing her name did not appear.

“Hm? By any chance, does this kid also not know any film directors?)

If so, a lame story, but my allies will increase.

“My favorite director…… are too many, I cannot narrow it down to one or two people, but.”

The the girl started the conversation.

“I admire Sahara Okamoto’s rhythmic production in old Japanese films, and since the ‘80’s, I’ve had a deep impression with Sogo Ishii’s works. However recently, I’ve been thinking that Kenji Uchida’s precise calculated works are really wonderful. As for foreign films….” [6][7]

She then started listing directors that I’ve never heard of before.

“Ah. We get that you’re well-versed in the subject so please stop. You’re making everyone else look pitiful you know?”

I thought I heard a weak tongue click, but nevertheless Kawasegawa stopped talking. 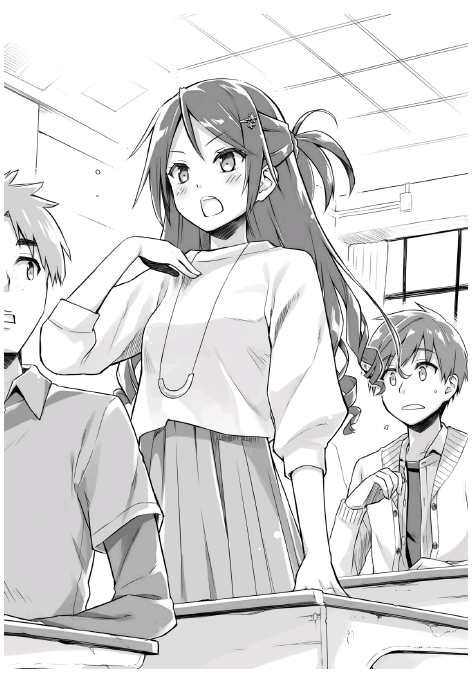 (…That was the reason she became silent all of a sudden?)

It felt like an ill-natured bee that had striked with all its strength.

The neighbor Genkirou was completely in admiration.

Even from other seats, there were many gazes of respect aimed at her.

The hope of the few anime masters left, Nanako said them first.

When I gave my prayers so I won’t lose another stock somehow,

While tilting her head to the side, an obvious ‘none’ expression could be seen.

(Ah, this is a serious person.)

This was not the ‘effect’ of Kawasegawa at first, but the atmosphere that she really did not know.

(Shinoaki, instead of saying, “I don’t know,” this is also too unnatural/excessive……)

The moment that Shinoaki talked, the students feel down simultaneously on the spot. After closely looking, within the professors, a few probably fell over as well. This kind of easily getting into the mood feels really Kansai.

“Eh? A baseball coach and film director are different?”

Shinoaki tilted her head while sitting on her seat.

After a moment of silence, the next student resume the self-introductions as if nothing happened, and returned to the previous times.

However, the hall that was filled with respect for Kawasegawa just now, completely changed with Shinoaki’s remark; and was rewritten with ‘there’s something amazing here’ kind of curiosity.

“…… Even though she entered the film department, what’s with that girl. Unbelievable……”

Eiko Kawasegawa, who was in the seat in front of me, complained and muttered.

Looks like this school year will become an extremely chaotic group.

Footnotes:
1. Martin Scorsese, known for taking on themes like the mafia, organized crime and gang conflicts, guilt and redemption. If you watched the movie Goodfellas, Shutter Island, Cape Fear, and Casino then you watched his work. More on him here: http://nazr.in/1178
2. Yasujiro Ozu is somewhat obscure, but he did have quite an impact. His name is known in the international film community in fact. He’s known for having the camera gaze directly at actors and not over-the-shoulder; making it seem the actor’s speaking to the audience directly. Also, he avoided using [tracking shots]; those that have the camera follow the character as they move, and used the medium of focusing on a static object for a transition shot (so scene 1 > object > scene 2) to make the transitions more fluid (a good example would be time skip sequences which focus on a building in the background before panning back to scene 2). Most famous work is Tokyo Story (Tokyo Monotagari). More on him here: http://nazr.in/1179
3. Sam Peckinpah is a film director known for pushing the Wild West genre of film to a more expletive and violent direction, a big departure from other Wild West movies at the time. More on him here: http://nazr.in/117a
4.The Coen Brothers, John David Coen and Ethan Jesse Coen, are known for covering many genres and styles…and are more well known for making parodies of those styles. If you watched Miller’s Crossing, True Grit, or The Ladykillers, well that’s them. More on them here: http://nazr.in/117b
5. Keisuke Kinoshita isn’t as well known as Yasujiro Ozu outside of Japan, but he is a big name in the Japanese film industry. Known for tossing out a lot of films (~40 in his first 20 years as a director) and excelling in almost every genre, comedy, tragedy, social dramas, period films with the use of various styles. One of his works, A Farewell to Spring is noted for being the first homosexual film in Japan. Not much on him, but here you go: http://nazr.in/117c
6. Sogo Ishii, now known as Gakuryu Ishii since 2012, was one of the directors, if not THE director, that brought about the Japanese cyberpunk culture. He’s still active btw. More on him here (more of an interview though): http://nazr.in/117f
7. Here is actually where I think the author made a blurb. There are actually two well-respected Kenji Uchidas out there. One of them is a film director who debut in the early 2000s. However, what’s most likely being mentioned is the other one. The other Kenji Uchida debuted in the 1980s, but he is an ANIME Director. Known as the president right now of the Sunrise Animation Studio. His works include the Mobile Suit Gundam Zeta, Mobile Suit Gundam ZZ, Code Geas: Lelouch of the Rebellion. No links this time~~
8. Hayao Miyazaki. Founder of Studio Ghibi. Probably you can sum him up if you just say Nausicaä of the Valley of the Wind or Howl’s Moving Castle. I’ll have to direct you here if you want to know more: http://nazr.in/117g
9. Mamoru Oshii. Known for Ghost in the Shell and The Sky Crawlers. His focus is on making strong philosophy-oriented works. His alma mater is funnily enough the university this fictional one is based off: Tokyo Gakugei U. More on him here: http://nazr.in/117h
10. The word used for directors is ‘kantoku’. People are addressed like Miyazaki-kantoku for Director Miyazaki, but ‘kantoku’ also means coach, thus Ou-kantoku for Coach Ou. Shinoaki was confused of ‘kantoku’ (director) and ‘kantoku’ (coach). Fawkes referring to Fukuoka SoftBank Hawks, a Japanese baseball team. More info here: http://nazr.in/117i