Ongoing
Star Martial God Technique Shoujo Grand Summoning Holistic Fantasy Unlimited Anime Works In Search Of Love Love Dependency Disease Reincarnated as My Little Sister Can't Leave This Room Until I Get First Place on Syosetu
Picked Up By Others
My Pet Is a Holy Maiden Battle Over Giving Up the Throne Strongly Pampered Male Wife Being an Author Is a High Risk Occupation
Completed
I Reincarnated and Tried to Become a Genius Child Actor. I Want to Quit. Pampering Big Cat Wife Mushoku Tensei X-mas Special 2016 Until the Saint Loves Back (One-Shot) The Story of the Princess who Was Kidnapped by the Demon King (One-Shot)
Recruitment Subscribe

This novel is translated by Flowingcloud from Yado Inn as a collaboration with Ebisu Translations. Please check out more of me and my group’s translations at Yado Inn! Support me through Paypal, Patreon, or Ko-fi! Also, please turn off ad-block! Join Yado Inn’s Discord to join the community! Support the author by buying the raws!

TL Note: A lot of this part has references to brands and names that are popular or well known in Japan, but not to us.

First of all, while taking the aspirations of everyone, we decided on the cleaning and cooking duties…… there was no problem up to there but..

The third day after we starting living together..

The first sparks of trouble began with Shinoaki.

When I looked, Shinoaki sat in front of a cardboard box with “Shinoaki’s” written on it, and her eyes were teary.

At my question, a delightful voice answered me from behind.

His face was excessively content. When he put it like that, it was pretty easy to figure out who did it..

“Tsurayuki-kun, you ate my ‘Umakatoyo’ of your own accord right!”

“Isn’t that fine! They’re both masterpieces of Barusu Foods Corporation!” [3]

“It’s not fine! Do you know how important ‘Umakatoyo’ is to Kyushu people, Tsurayuki-kun!”

Somehow, it seems like Tsurayuki ate the noodles that Shinoaki brought from her home on his own accord. They were fussing over this one item.

Even if their dispute continued, there were completely no signs of settling this. Of course,

The moment I reluctantly tried to interject, the sliding door that seperated the living room and the bathroom rattled and opened.

“I have heard your stories!”

It was Nanako who was in the bath.

While in a daunting pose, came and lost her temper quickly at Tsurayuki.

“Apologize, Tsurayuki! Arbitrarily eating people’s meals, it’s not something we can have in a cohabitation life! It’s a crime!”

But for us, that wasn’t the problem. Leaving that aside, it couldn’t been helped that Nanako’s appearance caught our eyes. Did you come out in a hurry? Nanako’s upper half, only had a bra.

It looks like the largeness of her breasts was much greater of a crime, and my voice could not come out.

Her level of style was so good that she could laugh at gravure idols scornfully. Furthermore, they’re such a big size that I have to wonder how such thin clothing was able to hold them. [4]

“Well, Nanako um…… getting angry is fine, but how about, you look at your own chest for a bit?”

Tsurayuki, who was also absent minded, came to his senses and said.

Nanako was still angry while exposed, but.

Finally realizing it, she roughly realized about her upper half of her body as she became bright red.

And ran away at once.

“This isn’t settled! If you eat it next time, I’ll take a thousand yen for one!” 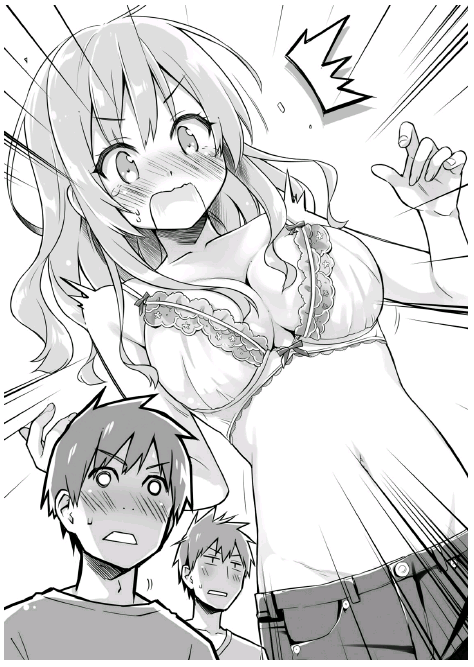 Thus, the incident remains questionably unresolved, and rules like ‘Don’t eat the noodles that other people buy without permission’ and ‘Write your name with a permanent marker on things you want to protect no matter what’ were formally established.

Our communal life troubles were not just that.

The day after the food strife between Shinoaki and Tsurayuki (and Nanako is included somehow), I, who had returned from college, thought to immerse myself comfortably in the bath.

After preparing the hot water, I killed time in the living room for a while. Seeing it was a good time, I opened the door to the bath naked vigorously.

It spanned about 3 seconds.

The moment I distincted between the pink body/object that was already inside.

Of course, when I opened the door, the door was vigorously shut after, and quickly put on clothes.

I was flustered and acting if it didn’t concern her, Shinoaki’s voice came from the bath.

“Ahaha, I thought something was weird~. As I thought I’d enter the bath, the hot water was already put out, and I thought I was lucky. It was Kyouya-kun.”

“Kyouya-kun, sorry, I misunderstood and entered the bath~.”

“No, I don’t particularly mind, or rather other than that, I didn’t see anything so I’m relieved!”

It’s a lie. I actually fully saw quite a lot.

“Eh? Aah~it’s fine, since you immediately shut the door, there’s no problem~.”

Shinoaki seemed to have cheerfully forgave me.

(Haa~ …… nevertheless, the other day was Nanako’s, and now Shinoaki’s. How nice.)

I thought I was able to possibly to be one of those lucky sukebe if we lived together, but to think that such a high level would be realized. [5]

As for more now, another threat on what to do took precedence.

There was another girl, who had an angry expression, that stood in front of me.

“…… Normally, even before you open the door to the bath, you would know if someone was inside right? This was on purpose right!?”

The headlock hurts for sure. However, Nanako did not only hurt me. My head firmly came in contact with her breast, and I was in a state where I did not know whether is was better to reflect or be excited.

This co-ed share-house life, is full of dangerous things for males.

Aah, college students are nice…… (TL Note: This is reference to the end of the last part.)

1. It’s referring to うまかっちゃん (Umakacchan) instant ramen.
2. This one is referring to 好きやねん (Sukiyanen) instant ramen, which is an Osaka specialty.
3. Of course, the name of the company is also a reference to the company that made both the products that the author was referring to. ハウス食品 (House Foods Corporation) is the real name of the company and they created both the of the popular instant ramens listed above.
4. A gravure idol (グラビアアイドル gurabia aidoru), often abbreviated to gradol (グラドル guradoru), is a Japanese female model who primarily models in magazines, especially those marketed to men, photobooks, or DVDs. Gravure idols, in most cases, emphasize their sexual attractiveness and often model in swimsuits.
5. This requires a bit of explaining lol. A ラッキースケベ (rakkii sukebe) [lit: lucky lewd person] is a term used for people who encounter those ecchi scenes like seeing a girls skirt being flipped up or tripping into a girl’s breasts. He’s lamenting on how he hit such a high level scene (which in anime/manga only happens later on in a couple’s relationship and not this early on).